Essence of my book

All Those Tears We Can’t See 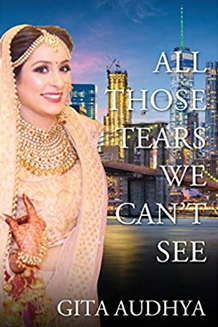 India’s heartbeat resonated from ancient times of harmony, in diversity and preserved the ancient temples, mosques, and churches, where Hindus, Muslims, Christians, Jains, Buddhists, Sikhs, and Jews all lived in harmony, except for a few occasions of violence. Monica felt so fortunate to experience it all. So many myths she read about India, and in her divine nature, she saw the footsteps from the past still existed today. Ancient India was the center of the world, where knowledge and wisdom were hidden in every mountain peak, and there was a divine mountain peak called Kailas, a paradise on Earth, where only Lord Shiva and Goddess Parvati resided. Snow peaked Kailas, which was the isolated mountain chain of Everest looked like a pure, pristine, mystical dream and no one was permitted to touch her.

In the Mughal period, India was extremely prosperous and had luxurious palaces with ruby, diamond, emerald and gold adornment. Maharaja wrote about the history of that time, including the exotic palace lifestyle. Monica had read enormous amounts of literature of ancient times and the present times of India so that she could compare what was retained and what was lost in time. She also read Michael Woods’ book. She found Bengali minds were very different, laced with mysticism and very emotional, deriving the spirituality and melancholy from far away holy mountains and rivers, like her mother.

My Book shows many angles of different societal influences in different times. I picked up the sediments of layers which have been depicted in my novel in a fictional fashion. Below are the fictional subject matters which made impact on our typical Hindu society in India over the years. I have shown those influences in the book and when you read across my book you will see in each chapter how those practices affected our existences and shape our lives.

“The Vedas are a large body of religious texts originating in ancient India.
Vedic Sanskrit, the oldest layer of Sanskrit literature and the oldest scriptures of Hinduism. The Rigveda or Rig Veda (“praise” and “knowledge”) is an ancient Indian collection of Vedic Sanskrit hymns and it is the oldest”
Himalayas, Spiritualism, Mahavarat. Ramayan. Yoga. And Ayurveda,

created by priests, The extortion they created to gain power over people, and it gave birth to untouchable which supplied constant labor

created with good intention to show division of labour but later manipulated by the male-dominated society to restrict every steps of the women who tried to achieve higher. The horrible dowry system was invented. Arranged marriages, suicide, torture by mother-in-laws, and unhappy marriages were well portrayed in my book

Enormous wealth, Prosperity were created by Muslim Sultans. India became the top of the world

The British colonialism in India lasted for about 190 years, beginning in 1757 and ended with India’s independence in 1947. With their regional control for over 200 years, it paved a way for modernization of the country thereby significantly influencing the art, culture, architecture, education, custom and style.

Americanization is the influence of American culture and business on other countries outside the United States of America, including their media, cuisine, business practices, popular culture, technology or political techniques. The term has been used since at least 1907. It was not originally a pejorative term but is often used by critics. Middle class wealth, sexual freedom