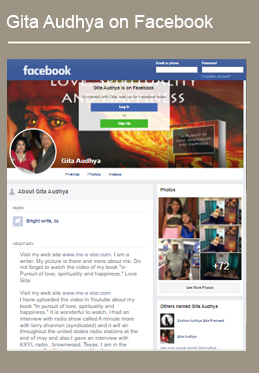 I was always passionate about writing at very early age and it was a lifelong dream of mine to be a successful writer. I always had lots of imagination about our subconscious and fascinating mind and the mystery of life. Though when in college in West Bengal I used to write about non-fiction but it did not bring any satisfaction because with that medium I could only educate people. Then I started to think how I can give a voice to a character with whom the reader can fantasize about the personality, put themselves into that spot and where I can express my lifetime experience, the beauty of life, the pain and conflict of living and glory of hope and that made me realized that I need to learn more about writing in a constructive way. I took honors courses in literature, read enormous amount of books and start to enjoy writing fiction for diverse audiences though it was a late start.

Growing Up In India

I was born in India and raised in there with Indian values and culture of my country. India you see now is not the same India back then when I was in my childhood – no glamour, no razzle-dazzle, no economic prosperity for middle class– the age of innocence –that’s the India I could relate to. There were no worries in my stereo-type life when I was younger and I did not have to think of my future either since my father would take care of all those things for me including my marriage. If I stayed over in India my father would have bought the house and employ a maid so that I did not have to attend the house-hold chores. Only place I was in charge was my education – that’s even up-to a certain point. But I was probably little bit ahead of my time as I dreamt about completing my B.A degree before my marriage. B.A. degree was painful to obtain due to my caste or social group. The major shock I got when I realize that whole Society’s burden was on my shoulder. I was only 18 years of age – I did not want to get married at that age. But when I saw my father was facing continuous criticisms from my relatives and neighbours –“why she has to go college – what she is going to do with her college degree, she will have to take care of the children any way and stay at home to bring them up – she is not going to work – is she?” – I had no choice but to agree to get married at that time. That was heart breaking for me. When you were a woman in that era you have very limited power or no power at all– most of the doors were shut. But I could not take the defeat without a fight – I had to fight hard to finish my education. It is now nearly impossible to imagine all those facts as the situation has dramatically changed at least for the girls who live in the city. Many things were prohibited for woman – specifically if you belong in a social class or group bound by caste system. And I could not think for any reason even today why people identify themselves with that whoever belongs to whichever group. For Brahmins “Priest” and Business sector so called “Banik” the rules and regulation are still in place, but for the other group that is diminishing. In America there are more opportunities for everybody. I have also seen in America many people with their lower class status made a huge difference in their life like for example a maid or house keeper’s son may be a doctor, scientist, lawyer – their fate is not bound by their status unlike India.

As I was a girl I had to obey many restrictions. Can you imagine that you had no saying in anything? I felt so helpless that time. My father had a little bit understanding but it was very difficult to override the Social rules and people’s opinion. I always wished that everybody should pursue their dream they have or had. Now all those practices have been changed in the major cities but not in the country sides.

So seeing no alternative I had to agree to get married with the condition that negotiation had to be made with the groom’s parent that they had to give the permission or allow me to study and finish my education. You can understand that the path was not very smooth for me as I had to defy all the rules set out for a very young married woman in India. To stay out of continuous disapproval I decided to stay in my parent’s house and occasionally visited my in-laws house. Against all the adverse situations finally I completed my education with lots of joy and tears. I overcame all the obstacles and earned my honors degree in literature. Imagine how joyful that was when constant fighting was stopped regarding my degree. Here it will be unimaginable that obtaining education is so painful.